With the help of her husband Al Ackermann

Alice’s love and passion was that all children should have life skills of water safety and the freedom to develop as individuals, at their own pace, while building self esteem and confidence.

Following in her mother's footsteps as a teacher, Alice Ackermann founded Happy Times Nursery School for children ages 2 to 5, on the second floor of her home in 1942. Only the second Nursery School in St. Louis County. Kindergarten teachers and parents praised her work with children. She continued the school until 1975 when her husband retired, but activity continued with the summer swim camp until she was in to her 90”s.

One special area of concern that Alice had for children was water safety, so in 1949, Happy Times Swim Program came into being. It started off very small with just one inflatable pool and soon after, with the help of her husband, Al Ackermann Sr., they started digging and building an in ground pool, with another soon to follow. They built the first two pools one by one and expanded the playground to provide the children plenty of excise along with many educational games and toys.

Over the years the camp became known as Ackermann’s Happy Times Swim Program where there have been thousands of children learning water safety along with all the fundamental swimming strokes. They come from far and wide. The St. Louis metropolitan area, St. Louis county and the surrounding counties and Illinois. Children and grandchildren of staff have also found a wonderful, rich learning experience at Ackermann’s Happy Times Swim Program.

Many who took their first strokes at Ackermann’s Happy Times Swim Program llc are currently or have competed successfully at the high school, local teams and collegiate levels. Several of them went on to set national records including son Albert at the Olympics.

Alice and Al’s three children, Beverly Shoop, Janet Zucker and Al Ackermann Jr., all taught and helped Alice run the camp until Janet and Al moved out of state and began their careers. After a short time Bev moved back to Kirkwood and continued to help Alice run the camp. Bev, husband DeVere’s and their children, Carol and Mike Shoop also grew up working at camp and continue to be part of the camp. Carol as Bev's assistant and Mike being Co-Owner, CPO, teacher & pool maintaince with their mom Bev Ackermann Shoop

Now doing business as “Ackermann’s Swim Camp”. The swim program is continuing as “Mrs A”, as we all referred to Mrs. Ackermann wanted it to be, and is co-owned and run by Bev Shoop and son Michael Shoop with the help of daughter Carol Shoop Carlstrom. 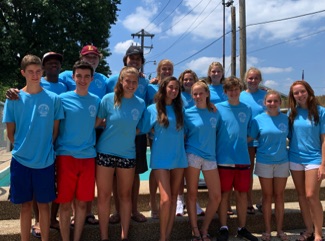 we had a dream.

Our dream for the near future is to replace our last above ground pool with an in-ground pool.